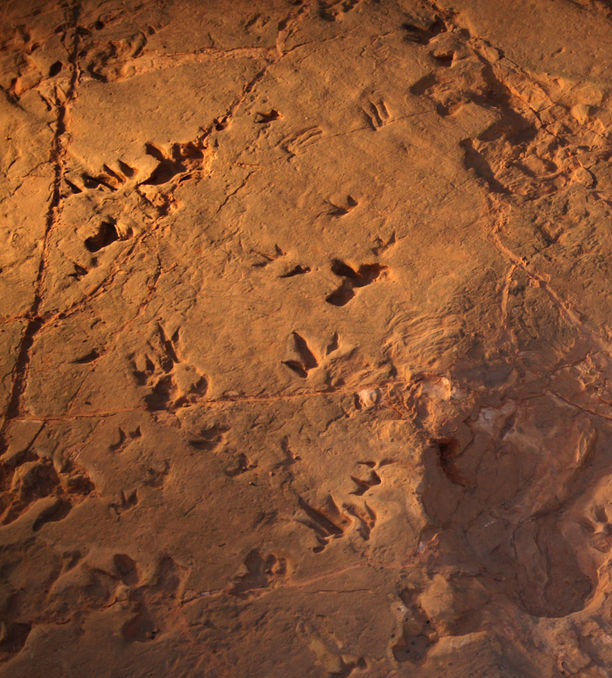 Artificial intelligence has helped solve a mystery millions of years in the making.

Scientists had been divided about just which kind of dinosaur left giant footprints in remote Queensland, until they trained a computer to work it out.

It appears that the prehistoric footprints thought to be made by a vicious dinosaur predator were in fact from a timid herbivore.

Large dinosaur footprints were first discovered at the site back in the 1970s, and for many years they were believed to be left by a predatory dinosaur, like Australovenator, with legs nearly two metres long.

The mysterious tracks were thought to be left during the mid-Cretaceous Period, around 93 million years ago, but working out what species made the footprints exactly - especially from tens of millions of years ago - is extraordinarily difficult.

The process of identification is made even more difficult by the fact that the big tracks are surrounded by thousands of tiny dinosaur footprints, leading many to think that a predatory beast must have sparked a stampede of smaller dinosaurs.

It was trained with 1,500 dinosaur footprints, all of which were theropod or ornithopod in origin - the groups of dinosaurs relevant to the Dinosaur Stampede National Monument prints. The tracks were also sent to five experts for clarification.

The results were clear: the tracks had been made by a herbivorous ornithopod dinosaur.

“The AI was the clear winner, outperforming all of the experts by a wide margin, with a margin of error of around 11 per cent,” says researcher Dr Jens Lallensack.

“When we used the AI on the large tracks from the Dinosaur Stampede National Monument, all but one of these tracks was confidently classified as left by an ornithopod dinosaur.”

The research is published in the Journal of the Royal Society Interface and includes collaborations between Australian, German, and UK researchers.