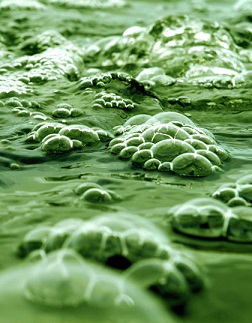 Microalgae and other microscopic plant-like organisms could help feed the world's growing population more sustainably than current agricultural systems, according to a new study.

An international team has analysed the current scientific literature on microalgae, finding that it has a high protein and nutrition content and can produce 167 times more biomass than corn annually while using the same amount of land.

Other models predict that existing algae strains could potentially replace 25 per cent of European protein consumption and 50 per cent of the total vegetable oil consumption when grown on available land that is not currently used for traditional crops.

The experts say that the biggest advantage is the protein production per acre, which dwarfs the current gold standard of soybean by at least 10 times more production per acre. According to the study, many algal species are rich in vitamins, minerals and macronutrients essential to the human diet, such as amino acids and omega-3 fatty acids.

In addition, some algal species can be grown in brackish or salty water - and, in at least one case, wastewater from a dairy operation - meaning freshwater can be reserved for other needs.

In the paper, authors describe the various scientific tools available to produce the most desirable traits for a commercially viable algal product.

For example, one previously published experiment described enhancing astaxanthin, an antioxidant pigment that has been shown to have various health benefits, through targeted genetic mutations.

Another mutagenic experiment was able to increase both biomass yield and protein content for a different algal strain, particularly when grown in a simple, low-cost sweet sorghum juice.