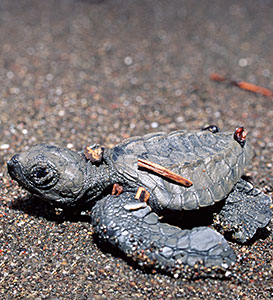 Researchers have found a genetic record locked within the biology of a species of turtle, which shows the effect of their exploitation in recent generations.

A study by a team from Flinders University has shown the inherited effects of the harvest of more than 2 million olive ridley turtles along the coast of Mexico between 1960 and 1990.

The study has demonstrated the significant and ongoing effects of human overexploitation of marine life. It was conducted by PhD student Jimena Rodríguez-Zárate and Professor Luciano Beheregaray from the Molecular Ecology Laboratory at Flinders University.

The research used samples from 334 turtles collected across 18 nesting sites from 3000 kilometres of Mexico’s Pacific coast.

“We not only found signal associated with recent loss of genetic diversity but two other interesting results: first, the intensive exploitation of a few nesting sites caused a reduction in genetic diversity in olive ridley turtles along the entire coastal region,” Ms Rodríguez-Zárate said.

“Second, the harvesting of individuals and nests had led to a change in the behaviour of nesting females who no longer nest in synchronized and massive mode with other females. Instead, they now seek a solitary nest,” she said.

Importantly, the study shows that even isolated, localised exploitation of a species can have a detrimental impact on a large-scale, regional level.

Olive ridley turtle populations have begun to bounce back since the introduction in 1990 of a prohibition on the harvest. The study proves that even though we have started to react to the errors of the past, greater efforts must be made in all forms of marine conservation.

“The results serve as a guide to where to set up marine reserves, for instance,” Professor Beheregaray said.

“This study contributes to the notion that humans have to stop seeing the oceans as an endless source of goods and resources.”

The paper has been published in the journal Biological Conservation, and is accessible online.