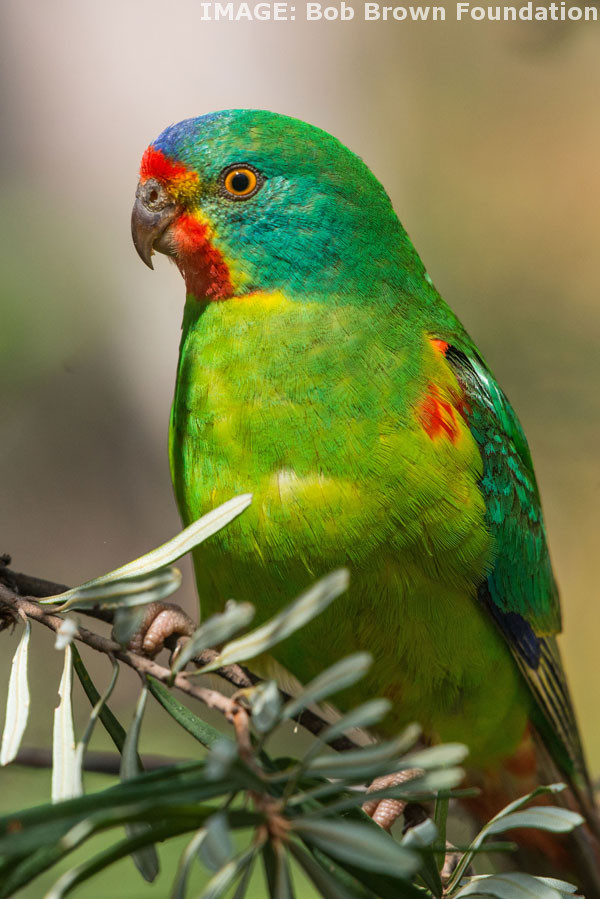 New research suggests there could be fewer than 300 swift parrots left in the wild.

The swift parrot is an extremely rare bird, with its estimated population never having exceeded 2,000.

It breeds only in Tasmania and flies across Bass Strait to forage on flowering eucalypts in open box–ironbark forests of the Australian mainland.

When the eucalypts’ flowering is poor, swift parrots are forced to travel far and wide to find sufficient food.

Lead researcher Dr George Olah says it is much lower than previous estimates and shows a need to urgently address major threats like deforestation.

“We used DNA extracted from blood and feather samples to estimate the population size of the swift parrot for the first time,” Dr Olah said.

“With our background knowledge of the species from a decade of research, this study has painted a much clearer, and starker picture of how few of these birds are currently left in the wild.

“Understanding the current population size of the swift parrot is essential for their conservation.”

The swift parrots' nomadic lifestyle makes them very difficult to study and protect.

“They fly around Tasmania looking for the best habitat, but they also migrate to mainland Australia each year looking for food,” co-author Professor Rob Heinsohn said.

“Each Spring they look for the best flowering patches of trees near nest hollows, so each year they end up in a different location.

“This also makes the actual census population size hard to estimate. But there are several ways you can use genetic samples to arrive at what's called the ‘effective population size’.”

The researchers hope this study will highlight how quickly the swift parrot is heading toward extinction.

“Swift parrots are critically threatened by a range of factors, including deforestation of their habitat,” co-author Dr Dejan Stojanovic said.

“This study shows that threats like the severe deforestation of the Tasmanian breeding habitat of swift parrots has drastically reduced their population size and increased the odds that the species will go extinct.”

The study could also help other endangered species.

“Our findings have important implications for other threatened species with unknown population sizes,” Dr Olah said.

“They demonstrate that by using available genetic data, we can get reasonable estimates of population sizes. These estimates can provide an early warning for conservation managers.”

The research has been published in Animal Conservation.