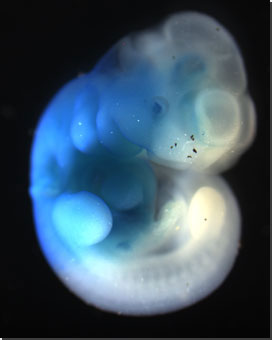 It is the first time functional mammalian eggs have been produced entirely within the confines of a petri dish.

If the method worked in humans, it would be a powerful tool to treat infertility or allow same-sex couples to reproduce.

The exciting new technique creates viable “artificial eggs” generated from stem cells, which can themselves be produced from skin cells.

The eggs – the first to be produced entirely outside of a mouse – produced healthy and fertile mouse pups when fertilised.

Egg cells have a unique role in producing the distinct and highly-specialised cells in an organism, so the Japanese team has been trying to replicate the process in the lab.

The new breakthrough comes from the same group of scientists that were the first to turn mouse skin cells into stem cells.

The experiment saw skin cells extracted from the tails of 10-week-old mice, turned into pluripotent stem cells, and then immersed in a complex chemical bath to coax them into becoming immature egg cells.

Tissue from the ovaries of mouse foetuses were added, causing the immature eggs to develop into mature eggs, or functional oocytes.

The eggs were fertilised and then transplanted into surrogate mice, about 3.5 per cent of which went on to produce pups.

Lead researcher Katsuhiko Hayashi is the first to admit that is a discouragingly low figure, and worry that the low quality eggs will produce abnormal offspring.

Still, it is the first time such a process has been successful at all, and assuming the considerable problems can be fixed, could be the first step on a path to assisting women with reproductive issues (low egg counts, age-related declines in fertility, disease, etc) and allowing couples of any gender to produce biological offspring.

The study has been published in the journal Nature Research.