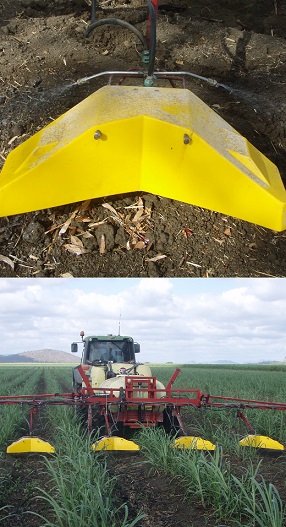 Scientists in North Queensland are reporting remarkable success in attempts to reduce the amount of agricultural chemical run-off to the Great Barrier Reef.

Members of CSIRO’s Water for a Healthy Country Flagship and researchers from James Cook University have trialled a new technique for applying herbicides to raised beds of furrow-irrigated sugar cane, using a specially adapted shielded sprayer.

The big yellow shields sit between and below the spray heads as a tractor makes its herbicide passes. The shields prevent most of the spray from landing on the soil between plants – directing it entirely onto the cane.

Many herbicides are known to damage reef ecosystems, yet they are used by farms located immediately near catchments and streams that run to the coast and Great Barrier Reef.

High rates of herbicide discharge have previously been measured in the Great Barrier Reef World Heritage Area and Great Barrier Reef Marine Park. The shielded sprayer is just one of several techniques suggested to try to reduce the run-off.

The researchers report the shield led to a 90 per cent reduction in run-off following irrigation of the farms in the lower Burdekin region. The encouraging result is pushing the team to explore new applications. The results have been published in the journal; Science of the Total Environment.

“Given the importance of improving GBR water quality additional testing and demonstration of these technologies across different soil types, farming systems - and possibly with different combinations of chemicals - would provide valuable additional testing of the approach from an industry perspective,” CSIRO research leader, Dr Rai Kookana said.

Almost the entire flow from the Burdekin River Irrigation Area in the dry season (from July to January) is made up of irrigation water from sugarcane and other cropping, showing the need to make these chemical dumps as harmless as possible.