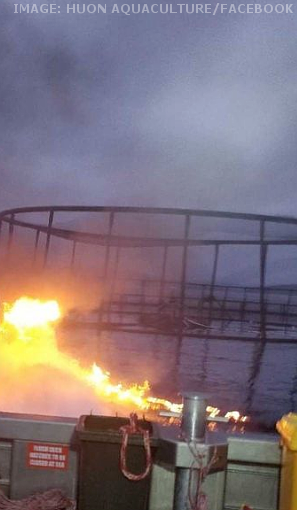 Fifty-thousand farmed salmon have liberated themselves after their floating pen caught fire.

Tasmanian firm Huon Aquaculture says the fire on Monday afternoon melted part of a pen and allowed the fish to slip out to freedom.

“The fire damaged approximately a third of a pen, burning through and melting the pen infrastructure above and just below the waterline,” the company said in a statement.

Huon CEO Peter Bender says it is the electrical fire on a fish pen he has seen in his 35 years in the industry, leaving him “baffled” as to what caused it.

Mr Bender says the fish will likely meet one of two ends, without doing too much damage.

“Escaped salmon typically don't last long, unfortunately, what the seals don't get, the fisherman quickly do,” he said

“Farmed salmon generally don't appear to feed on native species as they are typically used to feeding on fish pellets.”

Associate Professor Jeremy Lyle from Tasmania's Institute for Marine and Antarctic Studies (IMAS) agrees that the environmental impact is likely to be “not that significant”, but says that “any event like this is of some concern”.

He said anyone who catches one of the escaped salmon should examine the stomach contents and report their findings to IMAS for research purposes.

Community conservation group Neighbours of Fish Farming has suggested recreational fishers should be remunerated for catching the “pest species”.

A spokesperson for Environment Tasmania says it is “irresponsible of the company to suggest this won’t hurt the environment”.

In 2018, hundreds of thousands of fish were freed by wild weather that destroyed several fish farms near Tasmania.

While local fishers reaped the rewards, they faced extra challenges in catching them, as farmed fish are unused to pursuing bait.