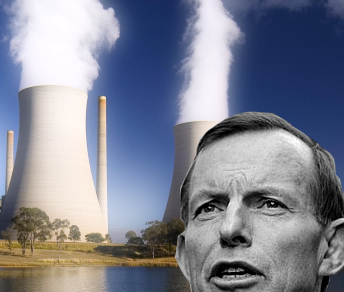 Industry groups have sent a warning that the Australian Government’s big plan to tackle harmful emissions may thoroughly miss the mark.

The business sector says Prime Minister Tony Abbott bolster should look to improve his government’s Direct Action climate policy if Australia is to meet its 5% emissions reduction target in an affordable way.

The comments bring the industries in line with the view of some scientists, who have slammed recent policies this week at a conference in Queensland.

Concerns have been raised about several missing sections of the Direct Action plan, which funds project by major polluters to reduce their emissions.

Some groups say the Prime Minister may simply go in the other direction and adjust the emission reduction target to suit the state of business.

There is little detail for the $2.5 billion fund. Resource companies in particular are waiting for the Government to detail its “baselines”, against which some operators will be judged to have “gone rogue” by increasing their emissions and ignoring the funds to improve them.

All industries will need to be protected from “rogue” operators, who may respond to the ineffective Direct Action scheme by not taking part, and could easily undo the good work of other firms in national emission reductions.

It is understood that some aspects of the plan will not be written until next year, so until then all interested parties will be raising their voices.

According to recent models, even if the Government spent $88 billion on Direct Action-type schemes between 2014 and 2050, emissions would still rise by about 45 per cent.

Another hitch has come around the legislation implementing the Direct Action plan, which appears unlikely to pass the Senate in its current form.

The business sector has welcomed the repeal of the carbon tax, but it is worried that Direct Action may not do much.

“We’ll see how far Direct Action gets us and how it looks in its final form, but we think the government is going to have to look at a range of other policies, including purchasing international carbon permits, and some kind of market mechanism to reach our target.”

The Business Council of Australia chief executive Jennifer Westacott said: “Our preference is for a properly designed price on carbon and a market mechanism, but we have to go back to basics.”

The Climate Institute, an ecologically-directed think-tank, says Direct Action will need “massive strengthening” as well as “a host of other regulations to get within even cooee of our minimum emission reduction target”, also arguing that a carbon price will have to be brought back in some form.

Some left-leaning media outlets have joked that with Direct Action, Tony Abbott has achieved the impossible; unity among economists.