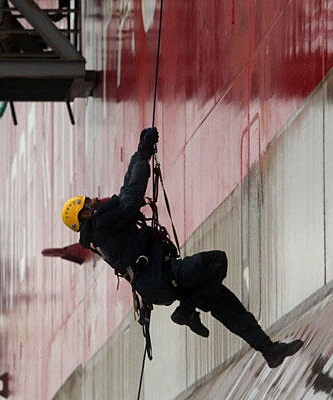 Russia is moving ahead with piracy charges against Greenpeace activists who boarded an oil platform in the Arctic, with two Australians set to face trial.

The protesters were drawing attention to energy giant Gazprom’s plans to drill for oil on the Arctic shelf when they climbed aboard the rig late last week. They were arrested onboard Greenpeace’s icebreaker ship the Arctic Sunrise by armed border guards soon after.

A group of about 30 activists including Tasmanian Colin Russell and British-born Australian resident Alex Harris were locked-down on the icebreaker, which is now being towed to the port of Murmansk under armed guard.

In statement today, Russian Investigative Committee spokesperson Vladimir Markin says: “It should be noted that all persons who attacked the platform, regardless of their citizenship, will be brought to criminal responsibility.”

Piracy carries a sentence of up to 15 years’ prison in Russia.

The Greenpeace members who physically climbed the oil rig were of Finnish and Swiss origin, but charges are seemingly going to be levelled against everyone the police could round up.

Russian navy patrol boats reportedly fired warning shots at the ship before locking the entire crew up in the mess hall. Greenpeace believes the Russian action was illegal due to the Arctic Sunrise being in international waters at the time, Russia claims it was within its special economic zone.

The activists are accusing Gazprom - the world's largest gas company – of gross environmental negligence in its plans to drill on the Arctic shelf. They say an oil spill would be catastrophic in an area with three nature reserves and home to polar bears, walruses and rare seabirds.

Gazprom will start production from its Prirazlomnaya platform in 2014.

Environmental concerns have taken a back seat in international negotiations over the area; with Russia, Norway and Canada scrambling to explore and exploit the region’s natural resources.