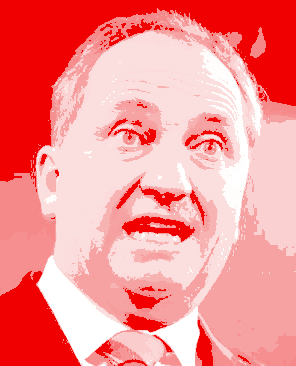 Mr Joyce made an aggressive key note address at the National Farmers' Federation Congress, with the Chinese ambassador to Australia in the room, in which he opened fire on Labor’s native vegetation policies.

The attack included swipes at policies introduced during the Rudd/Gillard government, such as the carbon tax, a temporary ban on live export to Indonesia, cutting funding to the Agriculture Department, abolishing Land and Water Australia and the Exceptional Circumstances drought assistance program, and generally taking a “zealot-like” approach to farmers’ issues.

“Labor dispossessed people of their private assets with tree clearing guidelines,” he said.

“[Thinking about this] while I was marking my 184th lamb that I'd just picked up, I thought; ‘There's a word for this — it's called communism’.”

Mr Joyce was asked if he thought his language was appropriate given that China's ambassador was there.

The Deputy Prime Minister replied; “What do you call it when someone says; ‘I'm going to socialise your private asset without payment’?”

Getting back to things he supports, Mr Joyce closed by reiterating his opposition to foreign ownership of agricultural land, and celebrating family farmers.

“It is a noble occupation, it feeds and clothes people. It is inherently good and inherently represents a strong nation,” he said.

“It's the whole essence of patriotism, [and] the love of one's country is best delivered when you own that country.

“So when the Labor Party insinuates that the family farm is passe, a little old fashioned, a bit dorky, that is an affront to me, who grew up on a family farm and who still owns a family farm.

“It is the ultimate sign that the Labor Party and the Greens just don't get it.

“And believe you me, there's one thing that people are not keen to do and that is die for a rented country.”