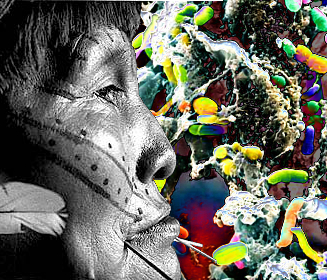 Humans could not live without a body full of useful bacteria, but it appears that modern life may be killing off our microbial mates.

A recent study looked at the microbes in people from a small, isolated tribe in the Amazonian jungles, to get a baseline on how modern diets, antibiotics and hygiene are altering bodily bacteria.

Venezuela’s Yanomami villagers were cut off from the outside world until 2009, and they appear to possess the most diverse collection of bacteria ever found in a group of people - including some never before seen.

The decline in microbiota diversity could be linked to the increase in modern society of immunological and metabolic diseases such as asthma, allergies, diabetes and obesity, according to fellow researcher Maria Dominguez-Bello, from New York University.

The study compared microbial samples from 34 of the 54 Yanomami villagers to a United States group, another Venezuelan Amazonian indigenous people, the Guahibo, and residents of rural Malawi in southern Africa.

The result showed that Yanomami have twice the number of microbe varieties of the US subjects, and about 30 to 40 per cent more bacterial diversity than the Malawians and Guahibo.

In fact, several of the bacteria found in the Yanomami but not in the others offered beneficial effects.

The Yanomami's microbes helped protect against kidney stones, and could actually harbour antibiotic-resistant genes, which is intriguing given that they had no exposure to commercial antibiotics.

The research team said its findings emphasise the need to extensively catalogue the functions of the bacteria in remote non-Westernised populations, before the invasion of modern practices affects what could be hugely beneficial bugs.

The full study is available here.