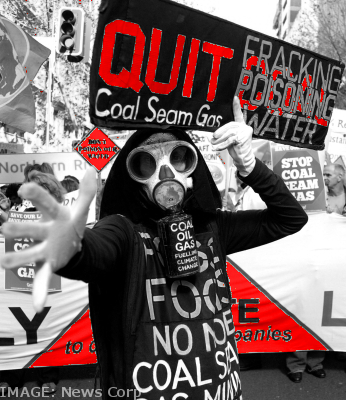 Thousands of protestors have taken to Sydney streets to call for more renewable energy.

Saturday’s “Time to Choose” rally was designed “to put the state government on notice” about ending coal seam gas and coal mining.

“We want the state government and the opposition to know that over the next year we are not going to stop talking about climate change, about coal and gas. We want to repower NSW, we want a renewable energy-powered NSW,” said organiser Neha Modlok from 350.org Australia.

Despite the NSW Government approving more solar farms every year, and maintaining an ambitious zero emissions target by 2050, conservationists are concerned about new legislation that could weaken environmental protections.

They also say that a number of proposed or operating mining ventures and applications for extensions show the state is still very much into fossil fuels.

Proposed CSG operations in Narribri, open cut coal mining in the Bylong valley, the Southern Highlands Hume Coal project, and Shenhua Mining’s Liverpool plains plans were all highlighted as threats to the state’s environment and communities.

“There is no safe place for coal seam gas in NSW. It threatens communities, precious groundwater aquifers and farmland, and the climate, wherever it goes,” said Naomi Hodgson of the Wilderness Alliance.

The Greens praised the rally-goers, and used the occasion to call for a “just transition plan” into renewables that would continue to support people and communities relying on the old industries.