Gecko given for green mine fuellers 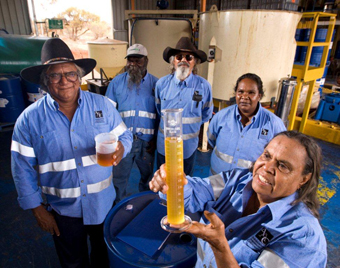 An award has been given to a group for a brilliant invention which can improve several stages of the mining process.

The Golden Gecko Award has been given to AshOil for the project which takes cooking oil from mining camps and transforms it into biodiesel for running machinery. The Golden Gecko Award is an initiative of The WA Department of Mines and Petroleum to highlight new ideas which help lessen the impact of mining on the environment.

AshOil and partners ESS Support Services Worldwide gathered up around 200,000 litres of used cooking oil from dozens of mining camps in the western part of the country this year. The company can convert one litre of oil into a litre of biodiesel, which is then sold back to the mining companies for use in various drilling and blasting rigs.

“We think this model can be applicable right across Australia where there are mining operations that generate large amounts of used cooking oil,” says Dr Stuart Gunzberg, from the company that launched AshOil.

Calculations say the project has so far reduced carbon emissions equivalent to taking 100 cars off the road, or about 500 metric tonnes of gas.

AshOil has been a product of the Ashburton Aboriginal Corporation, but research and development manager Dr Stuart Gunzberg says there are more great ideas in the works.

“There's a product produced in the biodiesel process called glycerol and we're working to develop a number of environmentally friendly products from it... they include things like soap wash, truck wash and a dust suppressant, which is something well and truly required in the Pilbara.”