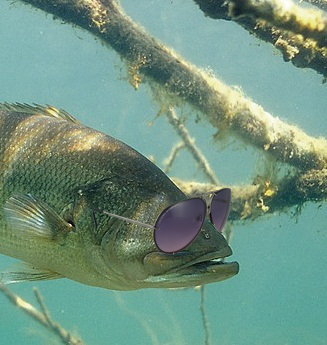 Researchers have discovered that some fish change colour to communicate with each other.

Australian scientists have found that Bluelined goatfish can perceive rapid changes in their body colour and pattern that could provide advantages in communicating with other fish.

Bluelined goatfish have a pair of slender whiskers extending from their chin which are used to probe the sand for food, and when they find food they often change colour from white to a prominent red and white striped pattern in less than 10 seconds.

When they change colour, they regularly attract other fish that then follow them.

Macquarie University researcher Louise Tosetto says goatfish feed with their heads buried in the sand, which obstructs their vision and leaves them vulnerable to predators.

“It seems that when goatfish are feeding and susceptible to predation that they use the striped, red pattern as a signal to other fish,” Ms Tosetto says.

Humans have trichromatic vision with red, green and blue pigments, but many coastal fish lack the red pigment and only have pigments that correspond to their environment, in this case green and blue.

The red component of sunlight is quickly absorbed by water and is only available in the top few meters of the water column.

“Most animals have completely different visual systems to humans and do not see colours and shapes the same way, so any assessment of a signalling system must determine what the receiver of the signal can see,” says co-author Professor Nathan Hart, Macquarie University’s Head of Biological Sciences.

The researchers were able to measure visual (colour) pigments in the eyes of goatfish.

“We didn’t find a dedicated red pigment but there was some sensitivity in the longer wavelengths, which suggests goatfish could still be able to see the red pattern,” Professor Hart said.

To confirm this, Ms Tosetto trained the goatfish to discriminate between a red card and a series of grey ‘distractor’ cards.

“Our results suggest that bluelined goatfish have the potential to see red when the light is available. The ability to see red may provide an advantage in recognising visual signals from others of the same species,” said Ms Tosetto.

Researchers believe that in understanding an animal’s visual abilities, there is greater capability to uncover more insight into their behaviour, functionally, and even how they might cope in a changing environment.