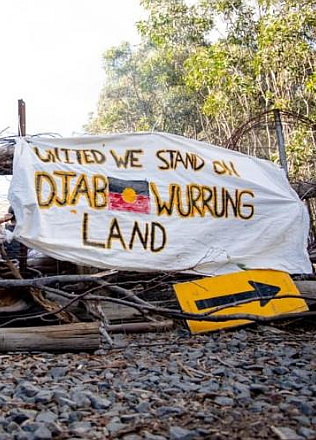 Questions are being asked about a secretive land deal behind a controversial highway upgrade in Victoria.

A makeshift tent embassy has been set up on Djab Wurrung land near sacred trees that are set to be knocked down as part of Victoria's $692 million Western Highway extension.

The trees are considered sacred by the supporters, who claim generations of women have given birth in the hollowed-out trunks.

Protesters have flocked from around the country to occupy the site, gaining local and international attention.

The Victorian Government says the management plan for the project contained no evidence of significant cultural heritage at the site.

Documents obtained by media outlets this week suggest the Aboriginal authority that signed off on the highway made a deal to benefit from the project.

According to the ABC, VicRoads signed the deal with the now-defunct Martang Registered Aboriginal Party in 2013.

The Aboriginal authority - which consisted entirely of members of the same family - hundreds of hectares of land east of the highway, in exchange for their approval of the road plan.

The Martang group bought the land and was then paid back as part of the deal.

The group is now tasked with conserving the site from development in exchange for annual royalties amounting to hundreds of thousands of dollars over coming years.

However, Martang is no longer a recognised cultural heritage authority after being deregistered last month. It lost its legitimacy after requirements for registration were enhanced

The company will continue to receive royalties from the deal with VicRoads.

Another Aboriginal authority called Eastern Maar has applied to replace Martang as the Registered Aboriginal Party for the area in question.