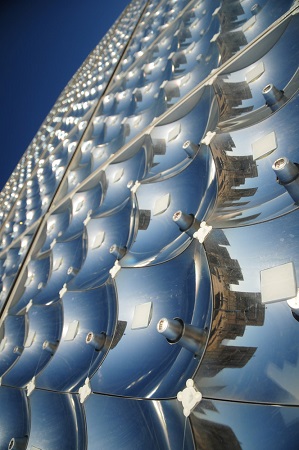 Researchers at a German institute have claimed a new record for the highest efficiency ever achieved in a solar panel.

The German Fraunhofer Institute for Solar Energy Systems, Soitec, CEA-Leti and the Helmholtz Center Berlin announced today that they have achieved a new height for the range of sunlight that is converted into electricity using a novel solar cell structure with four solar subcells. The team turned 44.7 per cent of the solar spectrum's energy, from ultraviolet through to infrared, into electrical energy.

The team have only been working on the project for three years, a relatively short time in the energy game, but their latest efforts mark a major milestone on the path to targeted 50 per cent efficiency.

The team have smashed their own record, set at 43.6 per cent in May. With a little bit of fine-tuning (intensive research and optimization) they achieved the figure of 44.7 per cent this week.

The cells used by the team are of the type called ‘concentrator photovoltaics’ (CPV), a technology which allows more than twice the efficiency of conventional photovoltaic units in sunny locations. Originally developed for applications in space, CPV has allowed the Germans to realise the highest-ever efficiency for the conversion of sunlight to electricity.

In a multi-junction solar cell, several cells made out of different semiconductor materials are stacked on top of each other. The subcells each absorb different wavelengths of the solar spectrum.

“We are incredibly proud of our team which has been working now for three years on this four-junction solar cell,” says Frank Dimroth, Department Head and Project Leader in charge of this development work at Fraunhofer ISE.

“This four-junction solar cell contains our collected expertise in this area over many years. Besides improved materials and optimization of the structure, a new procedure called wafer bonding plays a central role. With this technology, we are able to connect two semiconductor crystals, which otherwise cannot be grown on top of each other with high crystal quality. In this way we can produce the optimal semiconductor combination to create the highest efficiency solar cells.”

Presently Soitec, the company which owns the CPV technology, has installations in 18 different countries including Italy, France, South Africa and California. CPV is reportedly particularly effective for power plants in areas with a high percentage of direct radiation.