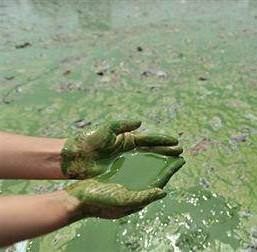 Researchers have estimated the global amount of phosphorous from human activities that entered Earth’s freshwater bodies from 2002 to 2010.

Phosphorous is a common component of mineral and manure fertilisers because it boosts crop yields, but a large portion of phosphorus applied as fertiliser is not taken up by plants, and either builds up in the soil or washes into rivers, lakes and coastal seas, according to the study’s authors.

The study also assessed whether human activity had surpassed the Earth’s ability to dilute and assimilate excess levels of phosphorus in fresh water bodies. The authors found phosphorous load exceeded the assimilation capacity of freshwater bodies in 38 per cent of Earth’s land surface, an area housing 90 per cent of the global human population.

“In many areas of the world either there’s not enough water to assimilate the phosphorus or the pollution load is so huge that the water system can’t assimilate everything,” said Mesfin Mekonnen, co-author of the new study.

The study’s results indicate freshwater bodies in areas with high water pollution levels are likely to suffer from eutrophication, or an excess level of nutrients, due to high phosphorous levels.

Eutrophication due to phosphorous pollution causes algal blooms, which can lead to the mortality of fish and plants due to lack of oxygen and light, and also reduces the use of the water for human purposes such as consumption and swimming.

The authors of the study examined agricultural activity to calculate the total amount of man-made phosphorous entering Earth’s surface water from 2002 to 2010.

They gathered data on how much fertiliser is applied per crop in each country, and estimated domestic and industrial phosphorous production by looking at protein consumption per capita per country.

“Other studies have calculated global phosphorous loads, but we went farther because we broke down the phosphorous load by various categories such as different crops, countries, and economic sectors, which no one has done,” Mr Mekonnen said.

China was found to have contributed 30 per cent of the freshwater phosphorous load, followed by India at 8 percent and the USA at 7 per cent.

The largest contribution to the global phosphorous load came from domestic sewage at 54 per cent, followed by agriculture at 38 per cent and industry at 8 per cent.