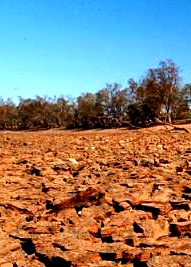 Politicians and the agricultural industry are calling for the revival of a rebate scheme on water spending for drought-affected graziers.

The Federal Government’s $13 million contribution to the Emergency Water Infrastructure Rebate ran out in February.

The rebate is part of the Queensland Government's Drought Relief Assistance Scheme, and considered one of the most effective forms of drought assistance.

But now that the Federal money has run dry, graziers can only apply for a 50 per cent rebate, rather than 75 per cent.

Federal Member for Kennedy, Bob Katter, wants the Federal Government to put up new money and return the rebate of 75 per cent.

“We have written to them [Federal Government], we have explained it in great detail and quite frankly we may as well have had a conversation with a gum tree,” he said.

“These people are on the ropes, they are fighting for their lives, they are trying to do something to overcome drought not only now but in the future.”

“It is such an incredibly worthwhile and effective program that. Why the Government would even contemplate removing that and not replacing that with something similar is beyond us,” AgForce CEO Charles Burke told the ABC.

“At a time when people where utilising it, it was delivering outcomes that in the drought was providing animal welfare cover as well as providing for the future.

“They are all the things that good drought policy should do; address the urgency of the issue at hand and then make provisions for the future.

“This was the perfect example [of good drought policy] and it defies logic why the Federal Government have ceased to continue that funding.

“We have been asking the Federal Government the question, in an environment particularly in Queensland where the drought conditions are as bad now as ever before, why they would reduce or remove that additional support that adds to the Queensland support? Why they would remove that and not want to continue it?

“The Queensland Government - both the previous government and current government - have seen the merit in continuing this very effective mechanism.

“We just don't understand the logic of the Federal Government,” he said.

The Queensland Government has written to Federal Agriculture Minister Barnaby Joyce to urge him to continue financial support for the scheme.

In a written response to the media, a spokesperson for the Federal Agriculture Minister said distributing both the Commonwealth and Queensland funding was the Queensland Government’s responsibility.

“This included managing the scheme to ensure that producers were informed about when the Commonwealth's funding would cease,” the statement read.

Reports say the Commonwealth is considering further measures to help drought-affected farmers, but there is no detail on what these may be.