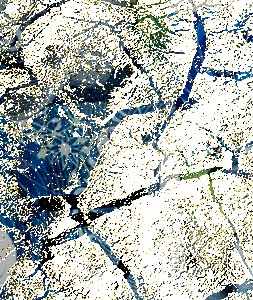 Over 100 people have gathered on the bone-dry bed of Lake Menindee to mourn the ‘death’ of the system.

They planted white crosses in the sand to protest 'mismanagement' of the lakes and the Darling River.

The lakes - Broken Hill’s main drinking water supply – are down to around 5 per cent of capacity.

Protesters say their water has been redirected to water users up and downstream.

“The Murray Darling Basin Authority and the New South Wales government have all but killed off the Menindee Lakes system with their mismanagement,” protest organiser Darryn Clifton said.

“We're for trying to have better management of the whole Darling River system from Mungendai down to Wentworth and everything in between, including the Menindee Lakes, and making the water sharing plan fairer for everyone, irrigators and communities.

“What they're doing is wrong, and we need to fix the system.”

The state government has pledged to spend more than $100 million on a project to secure a bore water supply for Broken Hill.

The scheme includes drilling on the Lake Menindee lake bed, which is now underway.

If there are no new flows to replenish the lakes' surface supply in coming months, the bores will be used instead.

The Greens' Jeremy Buckingham says a bore supply would let authorities reduce the amount of surface water required in the lakes.

“They've decided to kill off these lakes...so they can supply vested interest, big irrigators, big agriculture upstream and downstream with that water,” he told the crowd.

NSW Water Minister Niall Blair says all options are on the table as the government seeks a long-term solution for Broken Hill's needs.