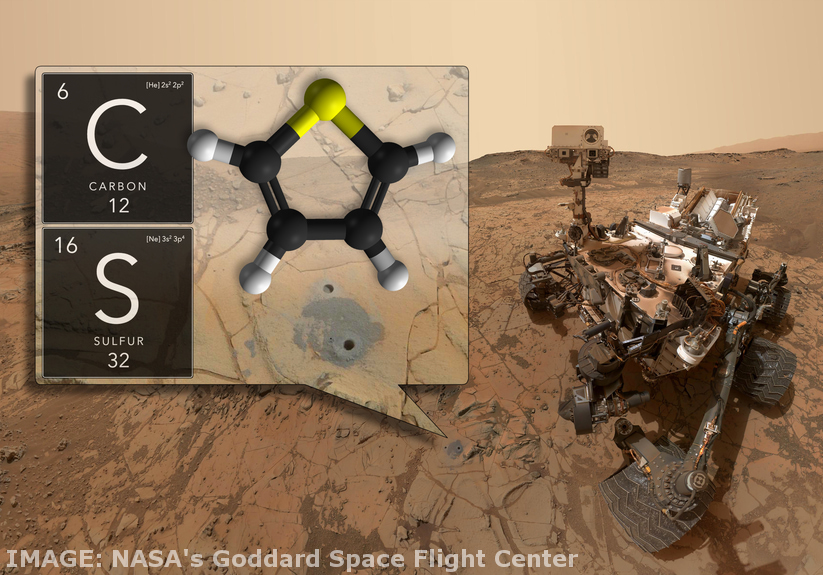 Information has been beamed back revealing “tough” organic molecules in 3-billion-year-old sedimentary rocks near the surface, as well as seasonal variations in the levels of methane in the atmosphere.

Organic molecules contain carbon and hydrogen, and also may include oxygen, nitrogen and other elements. While commonly associated with life, organic molecules also can be created by non-biological processes and are not necessarily indicators of life.

“Are there signs of life on Mars? We don’t know, but these results tell us we are on the right track,” says Michael Meyer, lead scientist for NASA’s Mars Exploration Program.

“With these new findings, Mars is telling us to stay the course and keep searching for evidence of life,” said Thomas Zurbuchen, associate administrator for the Science Mission Directorate at NASA Headquarters, in Washington.

“I’m confident that our ongoing and planned missions will unlock even more breathtaking discoveries on the Red Planet.”

“Curiosity has not determined the source of the organic molecules,” said Jen Eigenbrode of NASA’s Goddard Space Flight Center in Greenbelt, Maryland.

“Whether it holds a record of ancient life, was food for life, or has existed in the absence of life, organic matter in Martian materials holds chemical clues to planetary conditions and processes.”