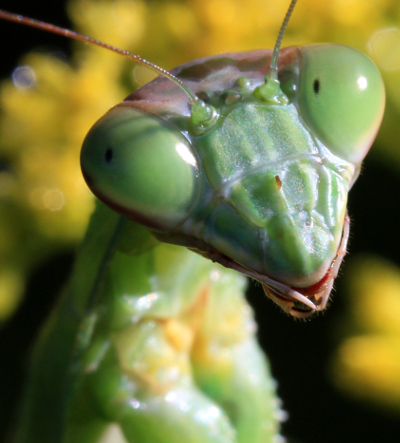 The praying mantid must walk a fine line between subtlety and style to stay camouflaged and still attract a mate – and now Australian researchers may have discovered one of its fashion secrets.

A research team from Macquarie University has investigated how males can visually detect camouflaged females.

The first struggle for the research team was that they themselves had great difficulty finding the bugs against the common green vegetation.

Once they found them, the team looked at how the Australian false garden mantis resolves this conflicting need of being invisible to predators and prey, but visible to mates.

Like most praying mantids, this species is assumed to be colour blind, with only a single colour receptor sensitive to green light.

“We know little about the praying mantid visual system, which has only been characterised in one or two species so far,” said research leader Dr Kate Barry.

Using physiological colour modelling to investigate how potential bird predators and potential insect prey might perceive these mantids against their green vegetation, the team found that praying mantids are very difficult to detect based on colour contrast with the background vegetation.

Surprisingly, they found that praying mantids were much brighter than the vegetation, but only the female abdomen.

“This result really struck us, as the female abdomen is easily the largest part of her body and it is also the part of the body that males need to mount in order to start mating” says Dr Barry.

Other body parts, such as the head or legs and the male abdomen did not differ in brightness compared to the background vegetation.

It appears to be an excellent solution to the problem because bird predators and insect prey are less likely to notice brightness contrasts as their search vision is based mostly on colour contrast.

On the other hand, mantid vision is very sensitive to brightness differences, meaning that male mantids would be able to visually detect the female in the vegetation.

The team also found that females in good condition (and therefore with more eggs) were brighter than females in poor condition.

By making the abdomen visible to males, females may not only improve mate location, but also signal their overall quality, as a large abdomen filled with eggs is more attractive to males.

'Sexual signals for the colour-blind: cryptic female mantids signal quality through brightness' has been published in the journal Functional Ecology.