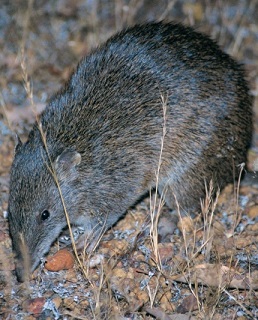 Researchers say the loss of some species has interrupted the vital role of small digging critters in keeping the ecosystem turning over.

Associate Professor Trish Flemming and colleagues from Murdoch University have prepared a report published in the recent edition of the journal Mammal Review.

The report highlights the role of many little characters from bandicoots, bilbies and boodies to potoroos, echidnas, wombats and woylies. Australia's mammals have a few thousand years’ head start on the mining boom, working as 'ecosystem engineers' to shape the face the country.

“The quenda [southern brown bandicoot] will turn over about 3.9 tonnes of every year,” in a process call “bioturbation” which plays a key role in soil health.

As animals rustle up grubs and truffles they penetrate the soil and let it breathe, cycling water and oxygen to increase soil moisture and decrease loss of nutrients through run off. The mining mammals also re-incorporate organic matter back into the earth, feeding billions of microorganisms and boosting nutrients for plants.

The system was working excellently until, unfortunately, European settlers arrived and brought their taste for hunting and eating non-violent animals.

The researchers have found around half of Australia’s digging mammal species are now extinct or threatened, and most have had their range of activities and therefore their ability to spread nutrients several diminished.

Professor Fleming says boodies (also known as bettongs) were once found across 60 per cent of the Australian continent but were poisoned because they dug up potatoes, they are now extinct in the wild.

A similar case for the bilby; once found in around 70 per cent of Australia, it was hunted for its soft light grey fur that was used to make coats for humans. The bilby’s range is now 20 per cent of what it was.

The spiky echidna appears to be the only digging mammal spared by recent settlers.

The effects will flow through all parts of the ecosystem, the report says, with measurable declines in seedling recruitment, plant health and vigour.

“That loss of resilience in plants could be why we're losing the trees across the landscape,” Professor Fleming says, referring to the mysterious death of trees such as the Tuart in Western Australia.

“Those animals are playing really important functions... if we recognise they are valuable then we should be making sure that we're putting them into a habitat that needs those [ecological] systems restored.”