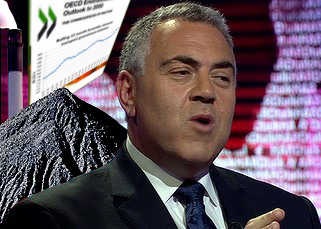 Treasurer Joe Hockey has faced a fiery questioning over Australia’s environmental, economic and diplomatic place in the world.

Appearing on the BBC's Hardtalk program overnight, Mr Hockey was asked to answer for Prime Minister Tony Abbott's views on coal, Australia’s place as the highest-polluting nation per capita in the OECD, and the Australian Government’s silence on democracy protests in Hong Kong.

Mr Hockey denied the findings of both the 2011 Garnaut Climate Change Review and a 2013 OECD report, which concluded that Australia was the highest carbon emitter per capita in the group of 34 countries, even when discounting exports of energy.

“We've got a small population and very large land mass and we are an exporter of energy, so that measurement is a falsehood in a sense because it does not properly reflect exactly what our economy is,” Mr Hockey told the BBC.

The Garnaut Climate Change Review says: “Australia's per capita greenhouse gas emissions are the highest of any OECD country and are among the highest in the world.”

“Australia's per capita emissions are nearly twice the OECD average and more than four times the world average.”

“The nation’s most senior economic leader has embarrassed himself on international TV over a fact most school students would know.”

“So far Joe Hockey’s contributions to the global climate change debate have included petty remarks about wind turbines’ aesthetics, refusing to put climate change on the G20 agenda and now rejecting unambiguous facts about our carbon pollution as ‘ridiculous’,” he said.

Fairfax Media has made a section of the video available here;