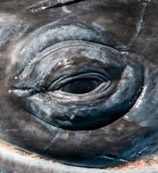 Queensland researchers have found that machine noise can cause whales to turn tail.

Oil and gas companies fire off loud acoustic air guns to probe the structure of the ocean floor in search of resources, but it is not known just how humpback whales react to these sounds.

A team of over 100 investigators have looked at the animals’ reactions to the strings air guns as they were towed across the migrating whales’ path off the coast of Queensland.

With people placed along 11km of coastline, researchers from the University of Queensland, were able to track the whales’ movements before the air guns began firing, while the guns were going off and for an hour after. ‘

The team entered the animals’ locations as they surfaced into a tracking system to reconstruct the whales’ courses.

The resulting maps showed the whales slowing and veering away from the airguns as they drew closer, suggesting that they were actively avoiding the air guns.

The team also needed to understand exactly how loud the air gun discharges were as they reached each animal, to disentangle the effects of the sound intensity and proximity on its behaviour.

Rob McCauley, from Curtin University, painstakingly reconstructed maps of the intensity of each air gun blast as it reverberated through the water and reached the whales by taking account of the acoustic qualities of the sea floor. In addition, he calculated the propeller noise intensity as the vessels towed the silenced air guns.

Then, with all of the observations in hand, Lindsay Scott-Hayward, from the University of St Andrews in the UK, created maps that related the air gun noise, and sound from the ship, to the vessel’s distance from the whale groups – which ranged from 10 km to about 500 m – to show that both proximity and air gun noise intensity had a significant effect on the animals’ behaviour.

“Humpback whales were more likely to avoid the air gun arrays, but not the boats alone, within 3 km of the source,” Dunlop said.