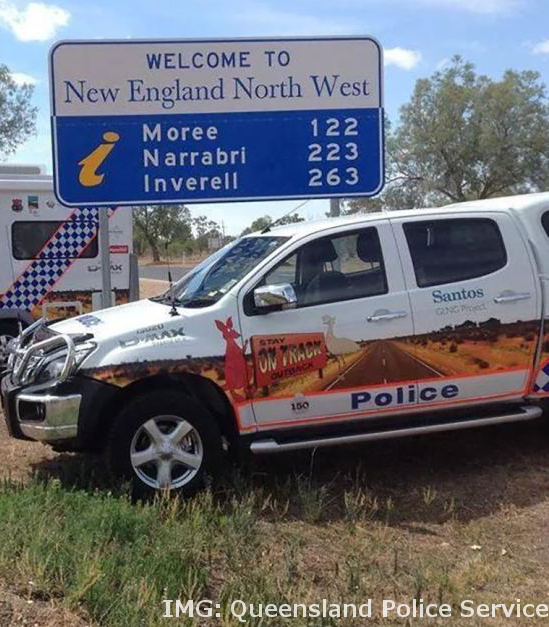 The Queensland Police Service is feeling some heat from its links with oil and gas giant Santos.

Several Police vehicles have been emblazoned with Santos logos, as it is a major sponsor of a new road safety campaign.

But the business link has caught the ire of community groups, in a state where rampant resource development has created strong grassroots opposition.

The ‘Stay On Track Outback’ campaign vehicles include a picture of an outback road, a kangaroo and emu and the logo for the Santos GLNG Project.

Drew Hutton from the anti-coal seam gas group Lock the Gate Alliance said it was a conflict of interest that the public should not abide.

“Advertising a company like Santos, which is a big coal seam gas company in Queensland, on the side of vehicles of the police whose job it is to enforce the law - including I might add against protestors who don't like coal seam gas - is a really bad idea,” he told the ABC.

But Queensland Police Commissioner Ian Stewart said the $40,000 they got from Santos was a valuable addition to their road safety campaign.

“There's two vehicles and what they do, they're all emblazoned with the safety messages that are central to this whole project and to carry the sponsor's name,” he said.

“But that's no different from the Brisbane Airport Corporation, RACQ - they're on other police vehicles, as is Crimestoppers who sponsor some of our work.”

“These are PR vehicles that we use at shows, we use at expos, all of those sorts of things just as any PR machine would be used by a company or another government organisation.

“This is not just Queensland Police that do this, I think every police agency in Australia does the same thing.

“We're always looking for sponsorships for particular programs that quite literally we want to focus on.”

New South Wales Police allow sponsors to display logos on their police cars, but there is a specific policy stating that car cannot be used for operational duties.

“Lock the Gate would not be able to sponsor a police car - nor should it. Neither should a company,” he said.

“These companies are subject to the law, the police have to enforce the law without fear or favour and if they're being sponsored by a company or by individuals against whom they might have to enforce that law then that compromises them immediately.”

Queensland Police Minister Jack Dempsey rubbished the claims of legions of social media users, saying; “at the end of the day our books are open, our doors are open.”

“It doesn't stop us doing our job that we have to do in terms of our core business, which is keeping Queensland safe.

“If people do the wrong thing we take action as we always will.”