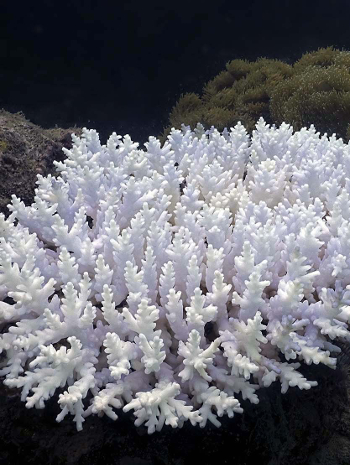 About 95 per cent of the reefs that make up the Great Barrier Reef have fallen victim to severe coral bleaching.

New aerial surveys by experts at James Cook University have revealed that the situation is now critical for one of Australia’s most prominent natural assets.

From Cairns all the way up to the Torres Strait, formerly hyper-coloured reefs are a now a dead sea of ghostly white.

Of 520 reefs surveyed, just four were found to be free of bleaching.

The slow death of the Reef is part of the third global coral bleaching event since 1998.

Even with coral cores provide 400 years of annual information, there is no evidence of similar disasters occurring before the late 20th century.

Professor Justin Marshall, a reef scientist from the University of Queensland who helped analyse the latest fly-over images, says he knows why it is happening.

“What we're seeing now is unequivocally to do with climate change,” he told reporters this week.

Lead researcher Professor Terry Hughes, a coral reef expert, is frustrated about the lack of action.

“The government has not been listening to us for the past 20 years,” he said.

“It has been inevitable that this bleaching event would happen, and now it has.

“We need to join the global community in reducing greenhouse gas emissions.

“For me, personally, it was devastating to look out of the chopper window and see reef after reef destroyed by bleaching.

“But really the emotion is not so much sadness as anger.

“I'm really angry that the government isn't listening to us, to the evidence we've been providing to them since 1998.”

Authorities from the Great Barrier Reef Marine Park Authority is conducting its own aerial surveys with in-water surveys over the next two weeks to even further gauge the extent of the coral bleaching.