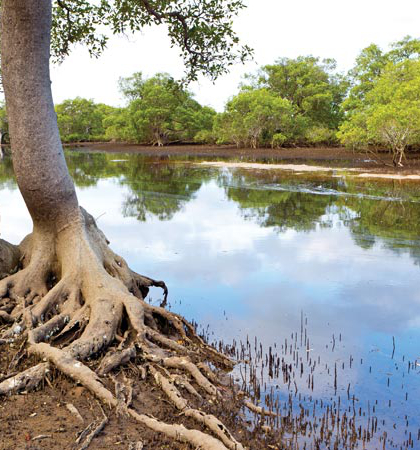 Australian scientists have shed light on one of the greatest mysteries of the humble eel.

Eels of all kinds undertake a mind-bending mating journey - swimming thousands of kilometres to secretive parts of the ocean to breed.

Even if they live in freshwater, eels will cross the seas to find a mate.

Using satellite tagging, researchers have followed Australasian short-finned eels from the estuaries of south-eastern Australia to as far north as the tropical Coral Sea - a distance of over 2,500km.

Little has been known about eel oceanic migration, particularly their spawning grounds.  A critical life history phase is their migration from freshwater rivers to spawn in distant oceans. To support eel recovery, scientists need to know more about their life cycle.

Now, for the first time, an eel migration has been tracked to a spawning location.

This eel (and several other similar species) has an amazing life cycle.

Adults can spend decades in freshwater habitats (such as rivers and wetlands) feeding and growing before metamorphosing into silver eels.

The silver eels migrate downstream, often during high river flows, and into the sea to spawn.

After spawning, the adults die and the newly hatched leaf shaped larvae (called leptocephali) commence a journey toward the coast, drifting on ocean currents and developing into glass eels before eventually entering rivers.

The young eels, now known as elvers, migrate further upstream into freshwater, developing into yellow eels and eventually becoming adults. These adults will then return to the sea to spawn.

Tagged eels were tracked for up to 5 months as they spread from their release sites. The long-term tracking picked up a flurry of movement toward what is now presumed to be a spawning area in the South Pacific Ocean.

The data also showed that migrating eels displayed regular shifts in the water column between shallow water at night and deep water during the day, up to 1km deep.

Eels are ecologically important as a top-order predator in freshwater streams, and culturally, as they have a particular cultural significance to First Nations People.

For example, the Gunditjmara people built complex aquaculture systems throughout the Budj Bim cultural landscape in southwest Victoria at least 7,000 years ago. This landscape has been added to the World Heritage List.

The work was undertaken in collaboration with Gunditjmara Traditional Owners, and eels from the Hopkins and Fitzroy River estuaries in south-east Australia and the Metung region in Gippsland.

The experts say new information is critical to improved management of eels, such as understanding the population potential impacts of climate change including changes to ocean temperatures and currents on migratory patterns and suitability of spawning areas.

More details are available in the following video.