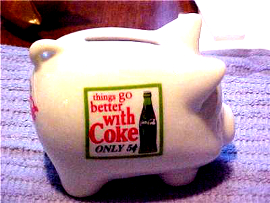 Reports say secretive negotiations are going on between state governments, looking at re-introducing a cash-for-cans scheme.

Fairfax Media outlet The Age says Victorian Premier Denis Napthine has held talks with the O'Farrell government in New South Wales in the hope of setting up the scheme across borders.

Recycling schemes have been aggressively fought by drinks manufacturers such as Coca-Cola, but are supported by large section of the community.

If the plan could be implemented it would see consumers receive a payment of ten cents for every can and bottle returned to a recycling depot, as is the case in South Australia and the Northern Territory.

The funds are usually leveraged from the companies that sell the containers, which means alcohol and soft-drink companies are strongly opposed and continually challenging the legality of such schemes.

The Australian Food and Grocery Council has run advertisements in the past labelling the scheme a “container tax”.

Dr Napthine says costs should be kept down by having joint state agreements to form a national plan.

“We in Victoria are very much at the forefront of trying to get a national system of container deposit legislation, and we'll do everything we can to get that as a national approach,” he said.

People in support of cash-for-cans say it can be used to divert tonnes of waste from landfill, improve recycling practices and reduce litter.

“I could see the benefits in South Australia of having container deposit legislation - the roadsides are clean, there is no litter from bottles and cans in creeks and streams and it's great for local sporting clubs and community clubs that make a dollar or two picking up the bottles and cans,” Dr Napthine said.

Container deposits can be beneficial for some of society’s most downtrodden members, providing a meagre stream of financial income for the homeless.

But the groups representing the companies that would have to pay say it will push up prices and drive down employment.

“It just doesn't make sense to introduce a container deposit levy in a state where we already have a good recycling system,” said Australian Industry Group state director Tim Piper.

“The cost to the consumer and Victorian jobs is not insignificant.”