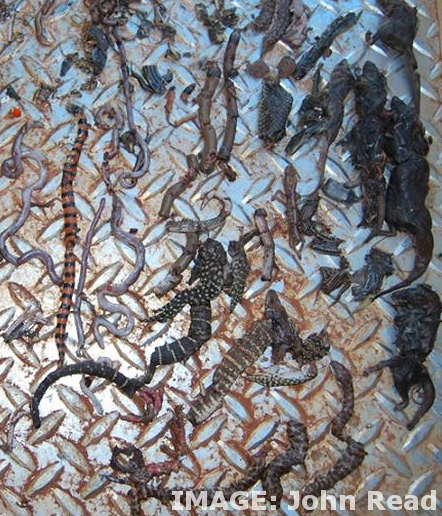 The study found local felines are responsible for about 650 million reptile deaths per year.

Researchers reviewed over 10,000 cat dietary samples from across Australia to create the first nation-wide assessment of the extent of predation by cats on Australia’s lizards and snakes.

“Some cats eat staggering numbers of reptiles. We found many examples of single cats binging on lizards, with a record of 40 individual lizards in a single cat stomach.”

Professor Woinarski said that while feral cats are not the main problem these species face, they are causing decline for some species, such as the threatened great desert skink.

“Comparing our findings with research from overseas we found that feral cats eat more reptiles in Australia than they do in the US or Europe,” he said.

“This could be because we have more abundant reptiles in Australia.”

The research was undertaken by the Threatened Species Recovery Hub of the Australian Government’s National Environmental Science Programme.