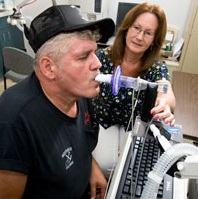 Unions and workers say there has been a resurgence of the disease, and experts believe it could point to a potential decline in exposure control.

“We strongly urge that the Australian guidelines be reviewed on the basis of current knowledge of CWP, in line with international standards, and that exposure limits and monitoring protocols are nationally standardised according to best practice guidelines,” wrote researchers Associate Professor Graeme Zosky and Associate Professor Deborah Yates .

They also recommended a comprehensive screening program for workers at risk, which would include a questionnaire, medical imaging and detailed lung function testing.

They say this should be performed every 3 years and “should be funded by the employer but preferably evaluated by physicians and radiologists not employed by the coal companies”.

Workers who show a decline in lung function should be referred early to specialist respiratory physicians with an interest in occupational lung disease.

“Where pneumoconiosis is diagnosed, we recommend a system of mandatory reporting to a centralised occupational lung disease register,” the authors advised.

The experts suggest that such a register be established in order to detect potential difficulties in surveillance and prevention processes.

The researchers wrote that there needs to be additional training for general practitioners to help them identify current or retired workers at risk of pneumoconiosis.

“It is unacceptable that any new cases of CWP should be occurring in Australia in 2016, and our aim should be to eliminate CWP in Australia altogether,” the authors concluded.

The study has been published in the Medical Journal of Australia, a publication of the Australian Medical Association.