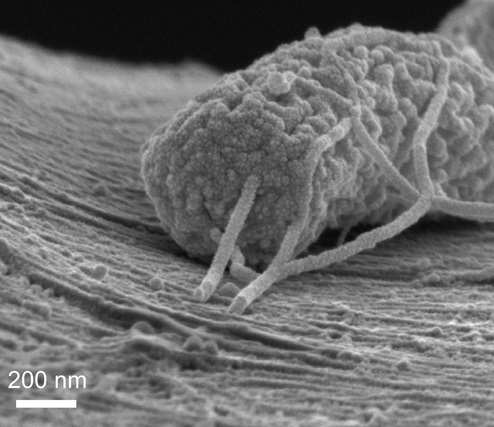 The energy of the future could come from the sewerage of today, with the development of a new type of battery which draws power from dissolved organic matter.

Organic waste products of everything from humans to farms and factories can be turned into electricity as efficiently as the highest performing solar cells, according to researchers working on the microbial battery at Stanford University in California.

The technology is more like a ‘being’ than an ‘invention’ – using naturally occurring micro-organisms that feast on plant and animal waste for their own biological fuel. Once they are wired up and plugged in, the microscopic generators excrete electrons in the same way humans emit waste.

The highly-charged little creatures latch themselves onto carbon filaments, where their calls of nature flow onto a positive electrode made of silver oxide to attract electrons.

Criddle explained the electrons could be redirected for valuable purposes such as an “external circuit where they could be used to, say, charge up batteries for human use” on their way to the silver oxide.

The silver oxide becomes a chunk of silver when it has taken on a full load of electrons, at which point it is re-oxidised and; “we stick it back in the battery, we can continue to harvest electrons,” Criddle said.

The amazing technological achievement may not make it to market though, given that silver oxide is an extremely expensive material. Professor Criddle understands this, saying “we want to get cheap materials that accept electrons.”

Researchers say developments in several fields could yield a breakthrough in the elegantly natural-yet-futuristic design.

Further research is now investigating the viability of other materials which can be scaled up for commercial production.

Details of the research have been published in the US Proceedings of the National Academy of Sciences.